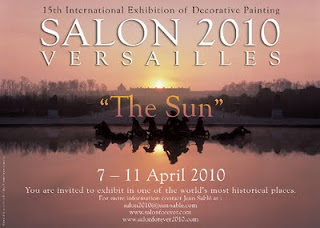 The history of the Salon dates back to the early 1990’s when a modest international gathering took place in Kuurne, Belgium. It was initiated by Alfred Marrecau, a noted grand master, and was sponsored by the Belgium Independent Painters Society. From left to right: Mr. Marrecau, initiator of the Salon, attending the May 1996 gathering in Quimiac, France. In the middle is Yannick Guegan, Swedish master Benny Karlsson, and Mrs. VanderKeelen. In March 1996, Yannick Guegan rekindled the concept of an international gathering by inviting the leaders in the decorative world to visit his studio and school in Quimiac, France. This gathering was considered to be a complete celebration of decorative art. Alfred Marrecau, at 86 years old, attended the event, and, of course, was delighted to see his initiative continuing to develop and on an even grander scale.

After Quimiac, Joris Arts and J.Berghuis jr. wanted to continue the gathering and planned the following year, with help of the Dutch Employers Union (FOSAG), to host a gathering in Utrecht, The Netherlands. From then on, the professional gatherings had a name: the Salon. On the last evening in Holland during the closing dinner, the first American gathering was announced. The Salon would be held in Alexandria, Virginia.