Theresa Fike painted her first mural at 9 years old. Her parents were going out of town for the weekend. She asked them if she could paint her bedroom while they were gone, they said yes but didn’t really believe she would do it. Theresa’s passion for the decorative arts really started that weekend. When her parents got back Theresa had painted five 9-foot tall daisies in flowerpots all over her room. In the mid 60’s there was this anti marijuana campaign. It was a totally goofy looking daisy in a flowerpot that was smoking a jumbo-sized joint. The slogan was “don’t be a pot head.” Theresa had no clue what pot was or why it was so funny to everyone when they saw she had glued used cigarette butts in the mouths of the “pot-smoking-flower-power-daisies.” 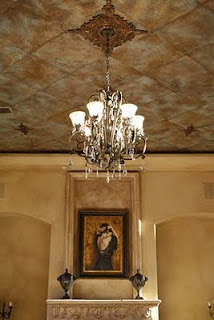 Theresa started Fike Studio, inc. in 1992. Since then she has received many awards and been featured in multiple magazines throughout the years. Her impressive clientele include such notables as Eddy Murphy, Basketball legend Chris Webber, members of the elite Tiffany Circle, the vice-president of MGM Grand Las Vegas, and the Rippy Corporation. She has appeared on public television and is a re-occurring guest speaker on Rae Designs radio program. Theresa is also the art director for the Singing Christmas Tree, an annual production that is a Sacramento holiday tradition. She recently attained national recognition as a fine artist for her music and dance series of oil paintings.

Theresa believes her sense of humor and her enthusiasm for art of all types is the key to her success. The two most consistent things her clients’ say about her is how much fun it is to have her on their project and how dedicated she is to her work.
Email Post
Labels: Featured Artists