Muralist Carves Art out of Concrete 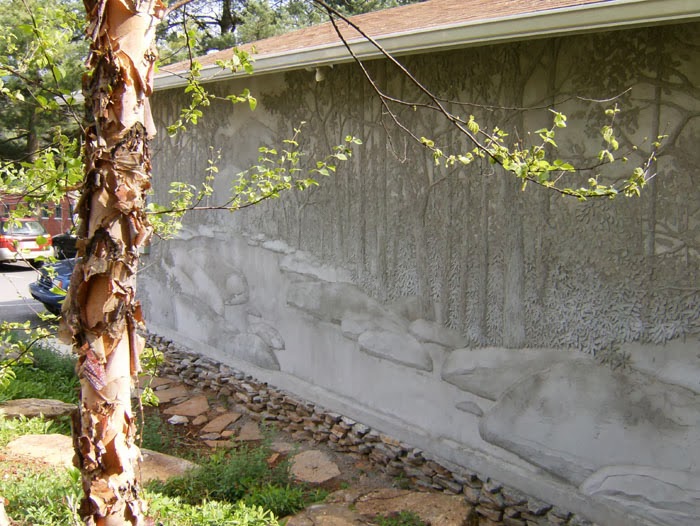 David Seils’ master craft, wall relief sculpture, is an art form that dates back to ancient times, when civilizations carved designs into stone walls, buildings and columns. But instead of chiseling away material, the Asheville, N.C.-based Seils builds up his wall sculptures in layers using mortar, a mason’s hawk and a trowel.
Seils, who began his career making his own plaster and stucco mixes from scratch and now sticks to a bagged mortar mix manufactured by North Carolina-based Sakrete, has left his mark at numerous homes, businesses and public spaces across the country.
A native of West Salem, Wis., Seils began drawing in third grade and quickly took the path of an aspiring artist. He received formal art training at schools in Wisconsin and elsewhere, including Viterbo University, The Clearing folk school, The University of Kansas, and the Ringling School of Art in Sarasota, Fla.
A skilled sculptor, he took a steady position as a graphic designer for the Miami Herald while maintaining a side career as a freelance architectural renderer.
The after-hours work paid off for Seils in the late 1980s, when one of his freelance clients approached him about taking on a 5,000-square-foot plaster wall sculpture project inside a Fort Lauderdale, Fla., auditorium. While he says he approached that project — an intricate, tree-filled outdoor scene — with some fear and uncertainty, it would turn out to be the first of more than three decades worth of job invitations.
As word spread about Seils’ wall-relief sculpture work, he began landing assignments for a variety of clients, including universities, banks, hotels and car dealerships. One of his more notable jobs took place about 10 years ago at Appalachian State University’s Summit Trail Solarium in Boone, N.C. Using his own mix of plaster with pearlite and lime, he sculpted a scene that highlights two natural North Carolina landmarks — Grandfather Mountain and Linville Falls — on the 25-foot-high walls of the solarium, which functions as a study area and special events venue at the university.
His own plaster and stucco mixes served him well for a while, but about six years ago, Seils fell upon his current go-to product, Sakrete’s Type S High-Strength Mortar/Stucco Mix, while reviewing product descriptions at a Home Depot store.
“It seemed ideal to use their product instead of mixing my own,” Seils says. “It’s premixed, I can dampen it and add layers, and it won’t crack. I use it exclusively now.”

One of Seils’ Sakrete projects lies on an exterior wall of a pottery studio at the Black Mountain Center for the Arts in Black Mountain, N.C. Seeking a finished product that would hold up in harsh weather and an alternative to a painted mural, the arts center asked Seils to create a relief sculpture depicting a stream, trees, rocks and rhododendrons to reflect the natural environment that surrounds the buildings, says Gale Jackson, executive director for the Black Mountain Center for the Arts.
Jackson says Seils brought the creative vision of an artist along with the technical expertise of an artisan to the job and produced a work of art that continues to amaze the public.
“We were excited to see the art become a part of our building,” Jackson says. “It’s a piece that changes a lot at night because of its lighting features. The lights create a 3-D experience and allow the shadows to really pop. And the garden beside it blends right into the scene — the wall is like a background to its surroundings.”
Seils’ discovery of Sakrete also led him to form a business relationship with the company. About two and a half years ago, Seils contacted Sakrete, noting his exclusive use of their product in his work, and invited them to view his sculpture at the Black Mountain Center for the Arts, says Eric Peterson, director of marketing and technical services for Sakrete.
Impressed, the company invited Seils to lead a live demonstration and discussion of their product at Sakrete’s booth at the 2012 World of Concrete event. The company also sponsors the material costs for some of Seils’ projects, including the second half of his Black Mountain Center for the Arts project — another relief sculpture on the opposite wall of the pottery studio — which is scheduled for completion this year.
The relief process
With 35 years of wall relief sculpture experience under his belt, the job process is second nature for Seils. After visiting a new client’s space and learning the theme or concept for the sculpture’s design, Seils sketches it out on paper, then draws the same design on the wall in charcoal, using a grid as a guide to bring the image up to scale. Working on a 2- or 3-square-foot area at a time and using a mason’s hawk and trowel, he applies and sculpts layers of material in a “quick and spontaneous” manner, he says. As they prefer a neutral, timeless look, not one of his clients has requested a topcoat or pigment for his sculptures, he adds.
“It’s very challenging, but it’s really rewarding once everything falls into place,” he says of the work. “It’s like giving a public talk. The first part is scary, and then I’ll start to loosen up.”
For inspiration, Seils says he likes to flip through magazines and peruse pictures online, but usually, the design is dictated by the client and the environment. (Think palm trees for a job in Florida and fir trees for a job in the mountains.)
In 2013, Seils will demonstrate the Type S High-Strength Mortar/Stucco Mix at Sakrete’s booth at the Concrete Decor Show in Charlotte as well as sculpt his second piece for an Asheville, N.C. Mercedes dealership — a scene that will depict an accelerating vehicle plunging through flying rocks.
“His ability to work with shadowing and layering of material to create a beautiful work of art is something I have watched and still can’t seem to put it into words well enough to describe,” Peterson says of Seils. “But from a pure art perspective, he can pretty much do any type of picture he wants with these materials, almost as if he were painting these sculptures on a canvas.”
www.wallsculpture.net
Email Post
Labels: concrete art Concrete class